It was World Day without Alcohol, the most consumed and accepted legal drug in Spain. According to data from the latest state survey, 62% of the population between 15 and 64 years old has consumed alcohol in the last 30 days, and 78% have done so in the last year. It is one of the main causes of illness and mortality and is related to more than 200 diseases. We explain how alcohol consumption affects your health.

In our day-to-day, we are exposed to multiple stimuli related to alcohol. We find your advertising on the facades and furniture of bars and other establishments, delivery trucks, advertisements on billboards, subway stations, and even at social and sporting events. It is present at our parties or celebrations and we meet up with friends to go for “drinks”. We associate drinking alcohol with positive aspects such as fun, youthful spirit, social and professional success, and even sports and healthy living. All this contributes to seeing alcohol consumption as something “normal” and positive; when in reality it is a serious public health problem.

Alcohol is a drug. Yes, lawful. The most consumed legal drug in our country and the one that produces the most problems of all kinds. According to the WHO, each year it produces 3.3 million deaths, that is, 5.9% of deaths. And Europe is at the head of the regions where it is consumed the most.

According to data from this organization, it causes more than 200 diseases, such as liver cirrhosis, some types of cancer, cardiovascular diseases and injuries caused by violence, suicides, and traffic accidents, as well as mental and behavioral disorders, such as alcoholism. Consumption in pregnant women has serious repercussions on the fetus.

Ethyl alcohol or ethanol is the drug found in alcoholic beverages, a highly addictive substance that depresses the central nervous system, from the group of sedatives such as barbiturates and benzodiazepines.

Once ingested, alcohol is rapidly absorbed through the walls of the stomach and small intestine and transported through the blood to the brain and other organs. Age, weight, gender, quantity, frequency, and how we take it to determine the effect and intensity of this drug. 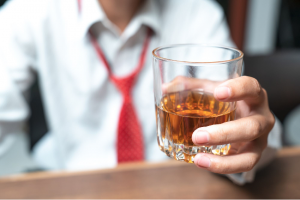 Alcohol is a central nervous system depressant and its consumption can cause drowsiness and relaxation, which affect attention and coordination. For this reason, drinking alcohol increases the risk of suffering a traffic or work accident.

Depending on its level in the blood, it can cause difficulties in attention, speech, apathy, vomiting, and even death, if it is very high.

According to the National Plan on Drugs, alcohol can cause serious health problems and family and social conflicts, which can manifest themselves even if the sufferer has not developed a dependency, that is, is not an alcoholic. Are:

When alcohol consumption occurs in very short periods of time, such as the weekend, the risks and damage to the body are multiplied.

When Do We Talk About Alcoholism?

Alcoholism or alcohol dependence is a chronic, progressive, and often fatal disease. The risk of developing it depends on several factors:

According to the WHO, we speak of alcoholism when the daily intake of alcoholic beverages exceeds 50 grams in women and 70 in men. It is characterized by emotional and sometimes organic dependence on this substance that produces progressive damage to health that can even lead to death.

Despite these symptoms, it is difficult to recognize that you have an alcohol problem, which makes a diagnosis very difficult.

Is My Alcohol Consumption “Normal”?

We must be careful with the consumption of alcohol because it may seem to us that we drink a “normal amount” and not realize that we are drinking too much, a fact that can cause problems for us and those around us.

On the net, you can find various self-tests that can indicate that you have a problem with alcohol. We propose these three:

At ITA we have specialized treatment for people with problems derived from alcohol consumption. We achieve full abstinence while intervening in all the areas damaged by this addiction. We want you to get your life back, your relationships with friends and family, and your health. Once you have overcome it, we accompany you to reduce the possibility of relapses. We can help you.

You may like to read Prevent alcoholism (addiction prevention): fundamental tips